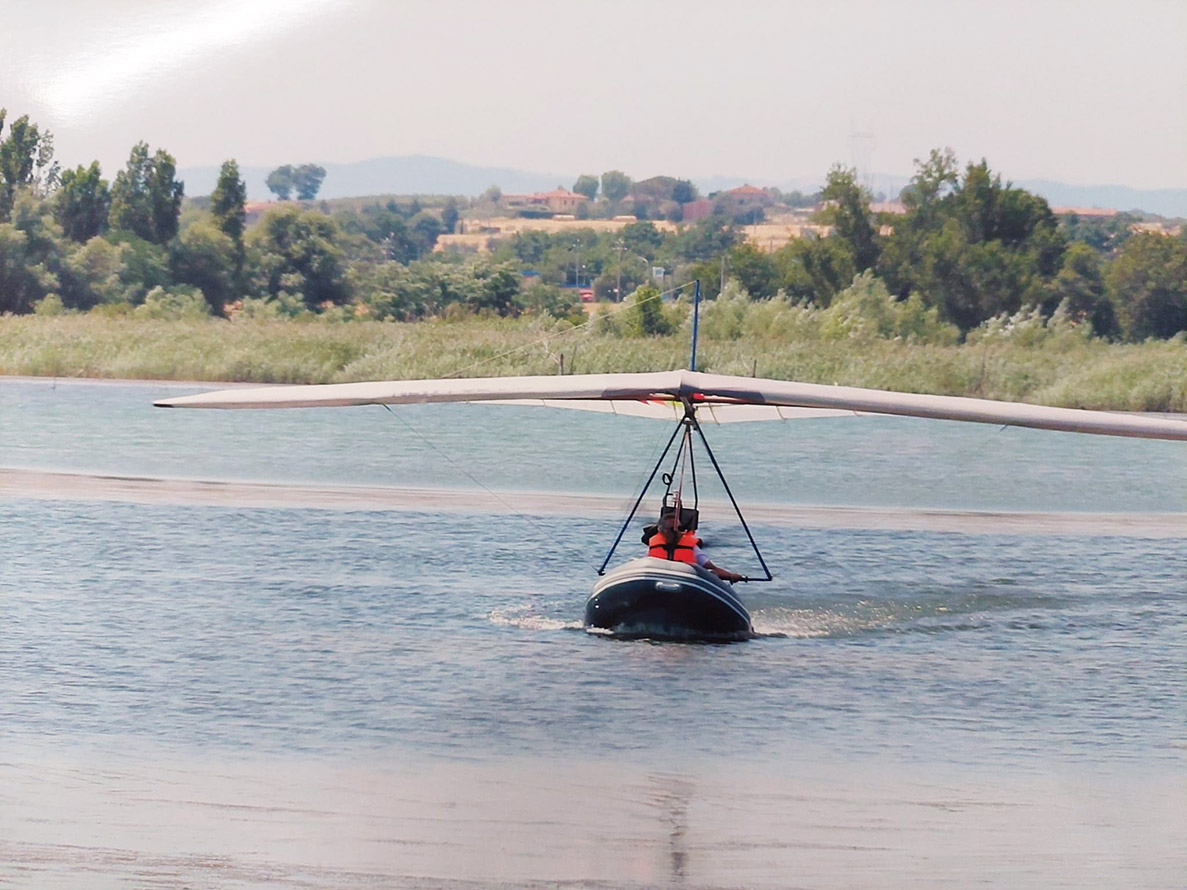 The stainless steel chassis, welded to the highest standards, has a simple and linear shape; the Polini Thor 250 engine has all the needed power.

Italian idea and staff, Italian engine, French hull and wing, Spanish production plant, all in the Canary Islands: an European mixture with an Italian heart that despite the name, it has nothing to do with the Polaris Motor of Gubbio, now closed for years, with which there have, however, been contacts. The company is located in Tenerife and it’s led by Fabrizio Paolocci, a Roman pilot who switched with ease from the Pitts Special to the motorized hang glider. The main idea was to resume and improve the legendary flying boat production conceived by Doi Malingri and sold worldwide in several hundreds of units. The top product is the classic two-seat FIB with the Rotax 582, both purely water based and amphibious aircrafts versions (the latter with significant improvements for both the back axle gasket seals and the electric drive system). But what we are actually interested in it’s the “newcomer”: the FIB UL120 minimal flight New Polaris 2020 FIB UL120. Very first flight impressions with an Ultra Light Flying Boat designed for the deregulated category UL120. Made for the deregulated minimal category and presented at the VFR & FUN in Pavullo.

The spark was born from the availability of good power single-cylinder engines and furthermore of very compact and extremely light hulls. As a consequence and despite the big wing La Mouette 19, the whole weighs only 114 kg when it’s empty.

We enjoyed the build quality of the welded AISI steel frame. Despite being a prototype, it is clearly superior to what we are used to see around. And the reason is obvious: the technical part of the company was started and guided by Franco «Frankavio» Petrucci, a true wizard of aeronautical construction and maintenance. Seeing persistent and spotless weld seams is good for your soul. And the soul of this minimal single-seat is exactly the hull: a small inflatable boat with a rigid keel that is very light thanks to the aluminum hull and that provides excellent protection from splashes thanks to the quite high tubulars. The used engine is the single cylinder liquid cooled Polini Thor 250. The wing is the flawless La Mouette 19, which is able to carry much more havier loads. Otherwise, all runs normally, with great simplicity and only one curious remark: the nautical helm is obviously retractable and controlled by a rope on the frame, but the rudder just as the one on an airplane: right pedal to go right, left pedal to go left. Of course, the «Delta» version is available too and it simply has got crossed cables. 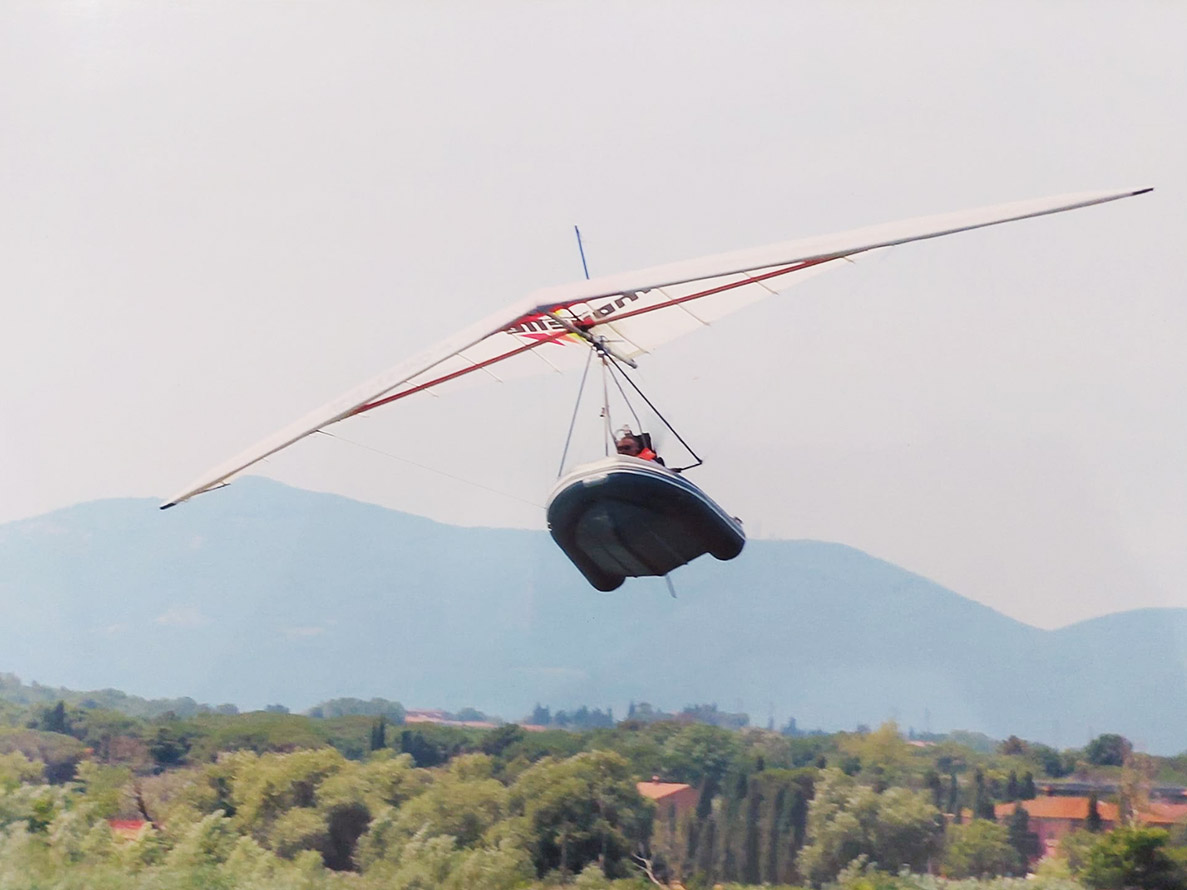 During the quick taxiing tests the proper trim position when gliding is flawless. 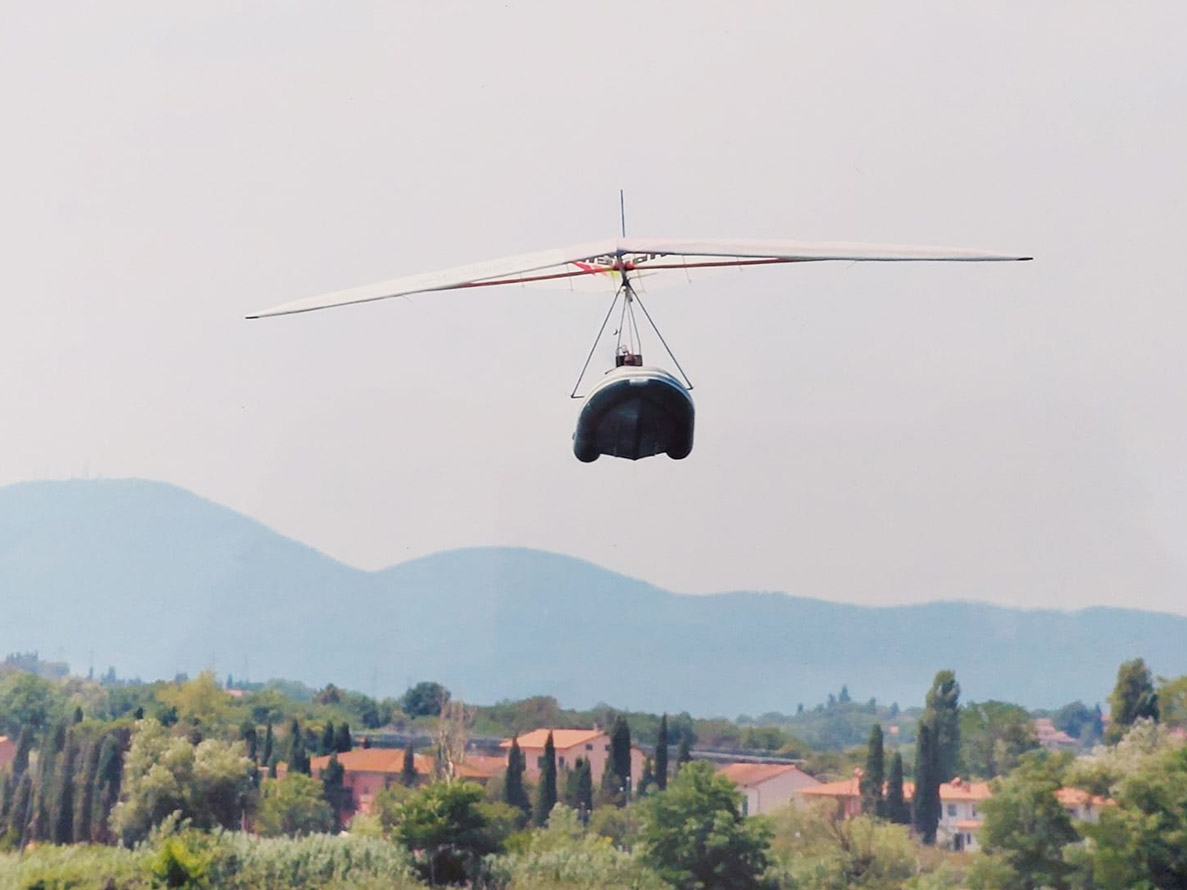 During the flight the wings appear to be soft and comfortable, but a a little slow, so they result perfect for heavy pilots.

The flotation and directionality tests without wings have highlighted the excellent stability of the hull that goes quickly into gliding and keeps an impeccable set attitude. With the wings on, very little changes, except that the stationary set attitude and at a low speed is slightly starboard down. There are side safety ropes for floating, and a hand throttle in addition to the gas pedal. The wing has a slightly lower trapeze than the seat, but all in all, it is comfortable. The three-blade propeller has armored leading edges and it’s at a proper distance from the keel even at its maximum opening. It seems obvious but you should know that a pseudo instructor / builder of FIB had to break two propellers before finding it out… After the general inspection and the pre-flight tests, we start the FIB and float, all with good directionality despite the inertia (which requires increasing the revs to turn tight) and excellent stability. The points that we appreciated the most (given the really small size of the hull) were that there was no pitching in the electrical transients and there was a rapid glide entry speeding up the engine, due to the exuberant boost of the Polini. To take off it is necessary though to lightly pull the bar in speed, in order to lower a bit the bow of the boat and glide harmonically. It’s then a matter of a couple of seconds and opening the bar makes the boat to take off immediately; it takes about 60 meters of running in the water with no wind. The climb rate is very good, about 3 m / s and there is no twisting effect after the take-off. In flight, the wing turns out to be very soft despite its size and low wing loading. It’s also soft when going into a turn and even in roll inversions.

A real pleasure, in our opinion! But with an actual performance (cruising around 50 km / h) that is affected by the wing’s size and surface, which we believe are perfect for heavy pilots (over 90 kg). A 16 meter wing (obviously with cables) would be better in our opinion since it is an option already adopted by others. Obviously, since this is the prototype, there are some minor adjustments to be done (including the adoption of a small rear bulkhead to protect the propeller from splashes in fast floating). These adjustments will be soon verified with an intense test session that will be done right here in Italy, but the FIB flies already very well. And what about the water landing? It’s very easy: push the gas at 40% and the big wing will lead you stable and safe to the contact with water, that is barely perceived and at ridiculous speed, without hard braking or directional instability. The “Little One” in the water is even more stable than the classic two-seats FIB. 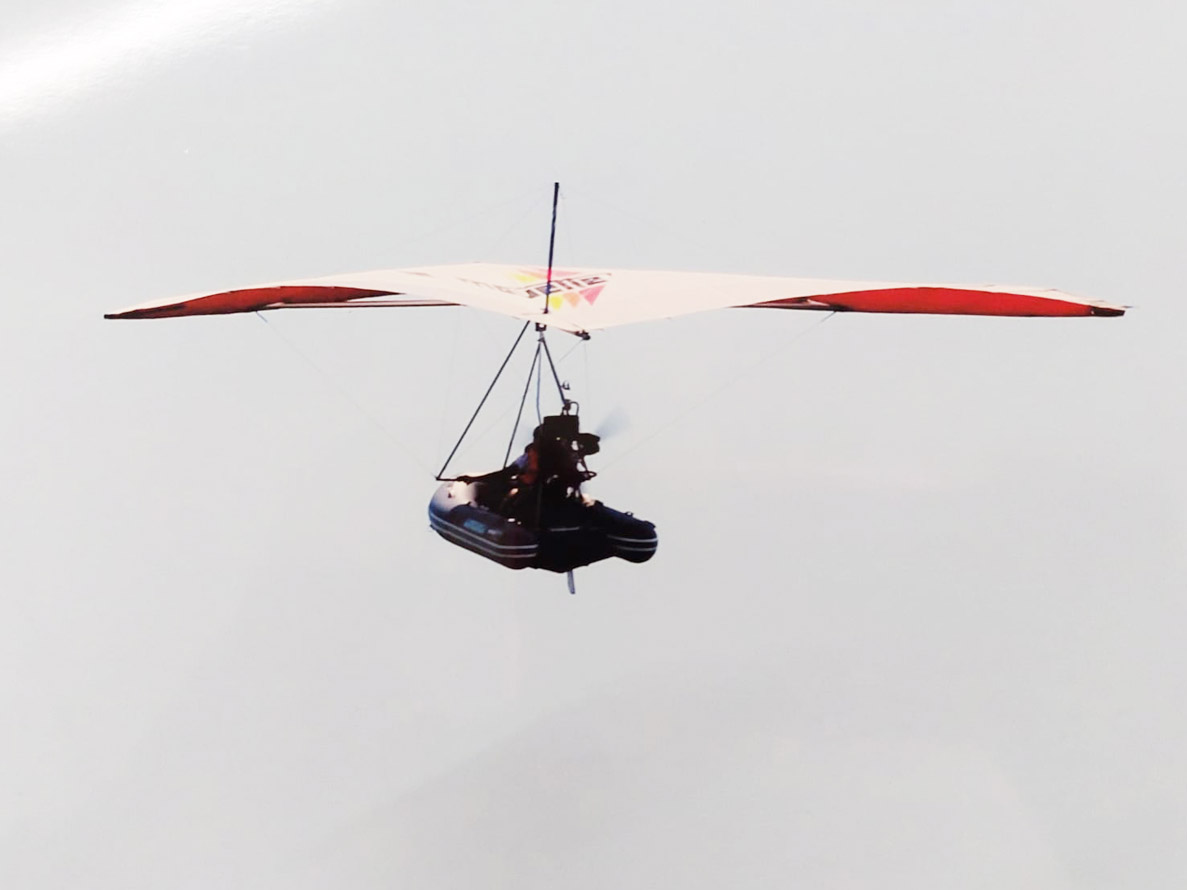 The FIB UL120 touches the water surface at low speed and stops itself in very few meters; the stability during floating is excellent even when the speed is reduced.